Insights into creating a successful online course: an interview with David Derichs and Natasha Sjöblom 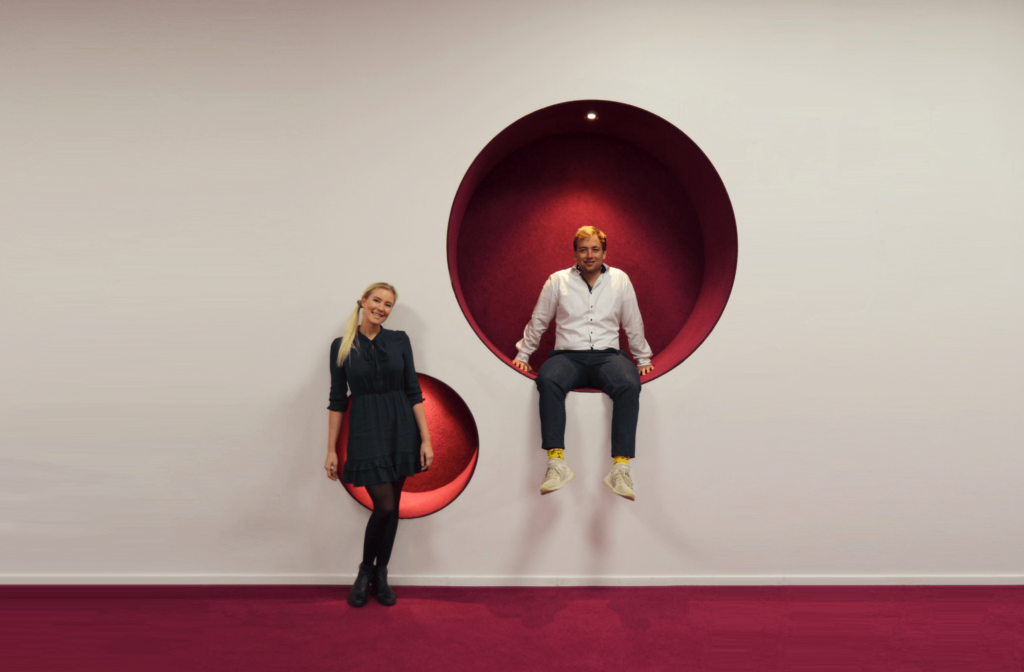 David Derichs and Natasha Sjöblom from the School of Business launched the Financial Statement Analysis online course, which was developed with the help of Aalto Online Learning. The course is targeted at MSc students in Accounting and was developed as a response to covid-19 giving an opportunity to students who didn’t get a summer job to advance their studies. In the future the course will be hosted through the Aalto Open University to a national and an international audience.

We discussed with David and Natasha how they came up with the concept of their online course, why they found it important to produce high-quality videos and what has been valuable for them about Aalto Online Learning. 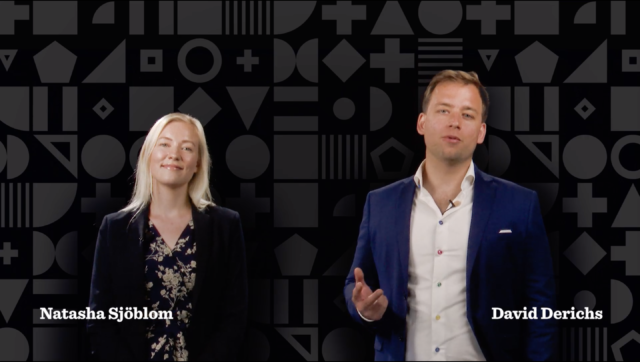 Watch the video of Introducing the Team and Course here.

David, Natasha, what happened at the stage from having an idea of the course to creating a well-defined concept?

David: The initial idea already emerged about 4 years ago. But at that time nothing happened because I had neither the incentive nor the time to act upon it. It took an outside shock like coronavirus and a following email by our Dean Timo [Dean of School of Business, Timo Korkeamäki] to trigger the development of the course by providing incentive and motivation. After understanding the funding structure, I started discussion with previous instructors, and Natasha who was at that time employed at my department and who had taken this course [the traditional version] before. My goal was to understand how the course could be redeveloped into an  online learning experience.

Natasha: I took this course about two years ago so I could bring in a student’s perspective. Back then I felt that the topics were not so clearly defined. We did a good job and aligned the structure of our materials with the course book.

David: It also helped that back then Natasha didn’t attend any lectures so by choice she already had an asynchronous course experience like we planned to do our online course. This was sort of an encouraging sign. One of the ideas which I personally had was to have this course asynchronously so over the summer period there are no fixed disturbances so people can somehow plan their free time activities enjoy summer and of course selfishly minimize the workload for us as instructors.

Natasha: We had defined activities in the course which I think really helped the students to independently go through the modules since the deliverables were clearly structured.

David: These activities were connected to the MyCourses feature “completion bar” so students could constantly assess their progress and instructors follow up who is doing what. To make this completion bar as useful as possible and as representative of the learning progress we squeezed every single learning activity in there, including reading the chapter and self-assessing  knowledge.

Do you see this completion bar as a good motivator for students?

Natasha: Definitely because there were a lot of students who checked the completion bar. Most students made use of this feature which shows its value as a motivator as it was not obligatory for them to use.

David: The course feedback also addressed the completion bar. Overall, the feedback was really good. 80% of the student feedback was in the 4-5 range. Students did like that they could complete this course asynchronously, track their progress, have instant feedback and self-evaluation throughout the course. They especially highlighted the videos and that they were professionally produced. In the course feedback of another course some students suggested to other teachers to do the videos like we did, which was a nice surprise. 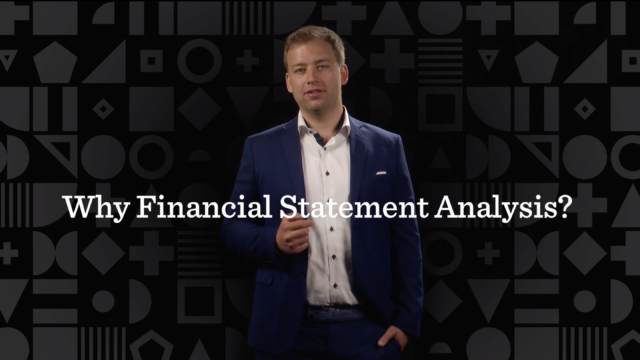 Watch the video of Setting the FSA stage here.

Now that we started talking about videos, let’s move on to the video production aspect of creating an online course. Many people think that writing a script is not important when you develop educational videos. What’s your take on it?

Natasha: I had never done any videos before and it was great that David addressed the importance of scriptwriting as he already had experience in video production. He instructed me how to prepare the scripts, including every hand gesture. Then I prepared them really well including several draft versions before the final scripts. In the situation in front of the camera, I realized I was so lucky that I had done that. Hadn’t I made the scripts, it would have required a lot of retakes. Also, the experience on set really made me understand the importance of scripting hand gestures and body language as even one might think those come naturally, in front of the camera they’re really easy to forget.

David: Yes, I think that’s the paradox. You want to look natural on videos. But to look natural  you have to do all these unnatural things. You basically have to read  your hand movements and your verbal script off the teleprompter not to appear awkward or out of place.  And it’s a small investment considering how much energy and, in the end, also money you save when you do this.

You can think  that the magic of a good script is that it will not make your speech sound scripted and that you will look natural.

David: If me and Natasha had not done the scripts, that would have seemed like a failure because you retake and retake and you just feel like you cannot do it. The energy will just drain out of you.

Natasha: Yes, you would have to do many retakes and then you would get stressed. For some of the last videos I didn’t even need retakes so it went very well.

So you wrote the scripts, you added all the non-verbal communication in there. Was there anything else how you prepared for the shooting session?

David: When preparing the script, it  was essential to read it out because I am not accustomed to writing speech. It is completely different from academic prose what we are used to in our everyday life.  When you read such a text from the teleprompter, it just sounds awkward.

Natasha: Yes, reading the script out loud definitely helped me. First I wrote a draft of my script and sent it to David for a review and he said it might not sound so good when you speak it out loud. Then I tried to read it out, and indeed it sounded weird. So, I made changes based on that and started early on to read the scripts out loud.

We are just so used to writing what looks best on paper and not what actually will sound good so that’s why reading aloud is extremely important.  Was it easy for you to explain your vision to the editor?

David: We got an external editor, Emil Lindfors, who was extremely good. He could almost instantly convert our very rough ideas into what we wanted to see in the final video. I would definitely work with him again given the opportunity.

If you were to give advice to a newcomer creating videos, what would it be?

Natasha: First of all, scripting is super important. At the same time start reading it out loud early on and practice hand gestures. Take a long time to rehearse before the shooting day.

David: The pre-production stage is the most important stage. A lot of the stage fear can be removed if you are well prepared. On filming day you can then really focus on how you look on camera instead of focusing so much on what you say.

One should also pay attention to what one wears. If one tends to sweat when nervous, then one should maybe wear something that doesn’t show it. Or if you have an oily face, then you take makeup.  I would always recommend to honestly judge your body reactions to stress so these little factors don’t throw your concentration off.

Natasha: The colour of clothes on camera came as a surprise to me. First I wore a bit darker dress and it didn’t appear from the black background. But I was lucky enough to have other options as instructed by your Aalto Studios production team and it was really good that I was able to change the outfit. So I would advise bringing several clothing alternatives to the set.

One should also pay attention to stage makeup. It should accentuate your everyday makeup – the camera lighting makes quite a lot of it disappear and as such one should exaggerate it for the stage.

What has been the most valuable for you about Aalto Online Learning?

David: It has been the project management support from Aalto Online Learning. You as the instructor will provide the content which is your expertise, but you don’t have to venture to other areas which are not your expertise – that would be very unproductive. I think Aalto Online Learning is extremely important from this perspective to get the highest level of productivity out of all of us.

Also I think it is an amazing institution in its capacity as an educational incubator to support a large variety of educational efforts joined with digitalization. Many other universities don’t have that, leading to a lower quality level. It is an extremely important part of Aalto – especially now in Covid times.

Very good to hear that! Can you describe Aalto Online Learning in one or two sentences to somebody who doesn’t know it?

Educational incubator for digital learning solutions. You get a good idea, you get sponsored. It’s like a venture capital fund where upon investing Aalto Online Learning puts money and expertise into you to make you grow.

Thank you David and Natasha for sharing your insights with us! We believe learning about your experience and following your tips on video production will be very helpful for people who start to produce their educational videos.