What does it take to produce an online course: interview with Håkan Mitts and Lidia Borisova

Håkan Mitts and Lidia Borisova from Aalto Ventures Program have launched the Entrepreneurship Intro online course which was developed as an Aalto Online Learning pilot. The course is designed from a small business founder’s perspective. You will embark together with the course protagonist Veera on her entrepreneurial journey to set up a business. Håkan and Lidia will coach Veera on how to proceed in challenging situations. To learn more about the idea behind the course and its concept, please check Tommi Byman’s guest post.

We discussed with Håkan and Lidia their online course production process, what expectations they had and how it turned out to be in reality, what challenges they faced and what is essential in launching an online course.

Lidia, Håkan, was it a long way to come to a shared vision of what course exactly you are making and did you have a lot of changes to the original plan?

Lidia: It was pretty easy, we just had a few workshops with the whiteboard, we were drawing Veera and her journey and thinking what the journey should be.

Håkan: After the workshops we had 10 session rough outline. The sessions changed a bit when we actually started to write them, and one session fell off but we got the main outline very early in the process. 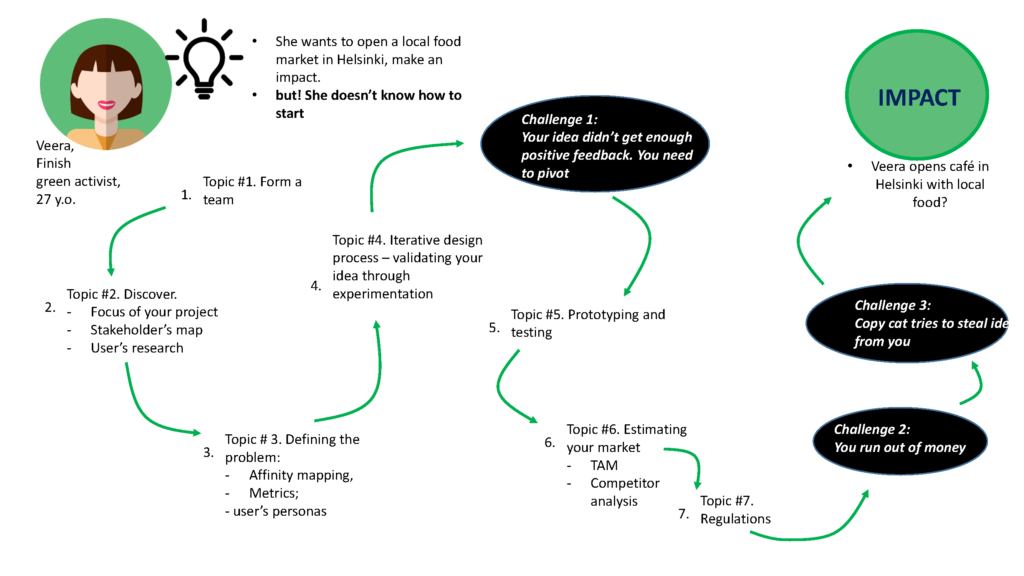 Looking back at the whole process, how much were your initial expectations about making an online course different from reality?

Håkan: Lot of talking was about the video shooting, but I still think that it was a little bit exaggerated, people made it sound worse than it was. On the other hand, all the other work that goes into creating written materials and quizzes took perhaps more time than we thought.

Lidia: Yes, I can agree, we were expecting that talking on camera would be much harder because neither of us had had this experience before but it was a very enjoyable and fun process. As long as it was with a teleprompter. But creating background materials for the course – Håkan, for instance, did a really tremendous work with all the quizzes and text behind it – was really heavy and we didn’t expect it to be like that.

Your course consists of 9 sections, each section has a video of Veera explaining the challenges she is facing and a video of you giving her advice on how to continue her entrepreneurial journey. Your videos are short, around 1-2 minutes. How did you select your course content and, most importantly, manage to deliver it in a compact way?

Lidia: We just know that students’ attention span is pretty short and we had that in mind from the beginning that the course should not be boring. So we have Veera’s story when she is talking and then us in the short videos. Then to add to the content we have also text and then an additional material section if students want to go deeper into content.

Håkan: We didn’t want to teach everything, we wanted to give a context where it would be easier to understand more in-depth material. Most usage contexts we foresee now are that it would be a part of the broader course. Then we don’t need to put everything in the online part. We can build on the basic stuff to different directions also.

Many people assume that having a script for an online course is not necessary. What’s your take on in?

Lidia: It is impossible to make a course without a teleprompter, it would have been extremely much harder if we hadn’t had it.

Håkan: If you want to be short, you more or less have to use it because otherwise people are starting to rant and go on. Especially as we wanted to have really focused content, I don’t think we could have done these things without having the scripts.

How did you prepare for the shooting session?

Lidia: I was a bit rehearsing phrases and the script but in the actual shooting somehow our parts were mixing so at some point I realized that we would just practice that in the studio.

Håkan: We could have done cold runs, sometimes during the actual shooting we noticed that there might be something that didn’t work when we were talking. I don’t think the schedule was ever dragged down because of that. It was okay to do small last minute edits to the script even while shooting.

You had several shooting days scheduled during Aalto Online Learning Monthly Studio Days within 2-3 month time period. Do you think it works better than shooting the whole course during, for example, 2 days in a row?

Lidia: I think it worked really well as it was because we had time to create the script and to think about it. We were shooting 3 sections at a time and it was pretty intensive in a way because we were feeling tired after the shooting. Shooting everything intensively would have been really difficult, both physically and emotionally, you start to make mistakes. You shoot the first time and it is a trial, then the second time might be good, then the third time and forth time are already bad. If you shoot too many of them on the same day, it would not be a good outcome, I guess.

We are also grateful for your help! You made so many processes much smoother: communications, organizing the shootings and reminding about them.  This was a huge help for us to make it a real course.

Håkan: I totally agree. Based on this experience it definitely pays off to have somebody who is not a part of the teaching team to act as a producer. It helps with keeping the schedule. It was extremely useful that we had these shootings scheduled for us last fall and it created a positive set of deadlines.

Was it easy to explain your vision of the end result to the editor of the videos and animation designer?

Lidia: After we had done the first section – the pilot – it was easy to explain what we were aiming for. That’s why we wanted to have the first session done to showcase the whole idea.

Håkan: A lot of work went to selecting the animator. If we had used an animator with whom we could not have had good communication going, I believe we would have had a lot of problems. Part of the animator equation was also to choose somebody who was willing and able to work in the style that we were looking for. If you want to control the cost of the animations, you really need to have an animator who wants to do the work in a cost-effective way. Silva [the animation designer] was okay with using computer generation and doing animations with cost-effective tools and not only drawing. She did first sketches on Veera’s figure and then we had first discussions around those and after that we did a full pilot session to test out the whole concept. The important thing is that it was a multistep process.

What was the most time-consuming part of the production?

Håkan: Doing the materials and the quizzes, putting things together and adapting it to the platform and things like that. That was probably the biggest chunk. Second biggest was writing a script. Third biggest was choosing an animator.

And our final question is what was the hardest thing in creating an online course?

Lidia: Getting the feedback is pretty hard.

Håkan: Yes, I agree, it has been surprisingly hard to actually get people to test drive the course. From the comments we got from the testers, it has been quite obvious how important it is to get that testing done. And it is not only testing the content itself but also things like getting stuck on the quizzes. There were a lot of observations we would have never thought about unless somebody would have actually gotten through the course. It should be treated as software and it should be tested.

—
Creating an online course is a very multifaceted process and it goes beyond just shooting the videos. As Håkan and Lidia emphasized, presenting on camera was easier than they assumed but other things created heavier workload than expected.

Firstly, finding the right person to join the team, like an animation designer in this case, might take time and freelancers might not always be available on a short notice. To ensure that all team members (even if a team is small) are on the same page about the desired outcome, consider doing a pilot.

Once you have the concept figured out and the team in place, you need to make sure to allocate enough time for writing the script before the shooting session. You will usually have several rounds of iterations at this stage. Reading your script out loud a couple of times before your studio time will help you avoid fixing the script during the shooting session, and it will make you more confident in presenting on camera. When the videos are in post-production, there usually are a few rounds of revisions with the editor.

Then you start creating quizzes, assignments, additional readings and other supporting materials for your course. Håkan and Lidia highlighted this as the most time-consuming part of production.

The final step is testing your course on the platform. It is always a good idea to have several people test the course before you officially launch it. As a course creator, you might not be able to notice certain things – whether content-related or technical – that are obvious for someone who has not been involved in the course production.

If you need help with planning your video production or if you would like to discuss your pilot plans and concepts from a learning experience perspective, please book a slot for our weekly Video Production or Learning Experience Design clinics. On the first week of June we are organizing the Video Training Week Online to equip you with the necessary skills for video production. More information is coming soon, stay tuned!